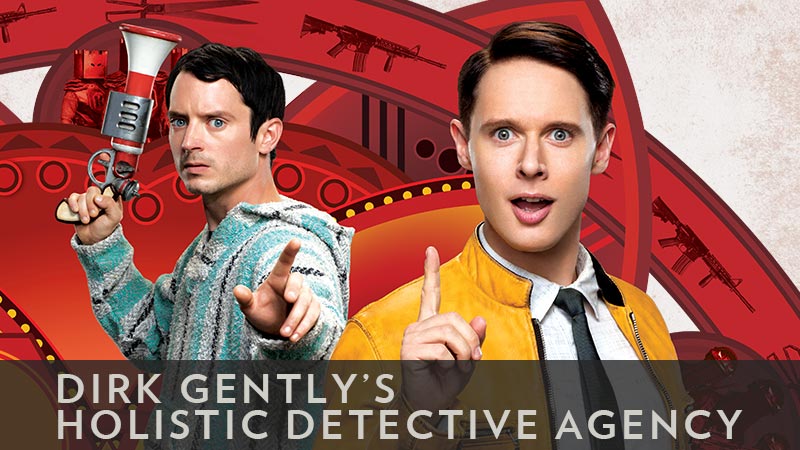 Everything is Connected
Every season is a dizzying, smart, dangerous, unexpected and (for us, not the people involved) fun adventure that explores a different genre. Season 1 was about time travel with body-swapping, and Season 2 involves an injection of fantasy. The vast dangers lurking in the magical realm of Wendimoor navigate a path to Earth, becoming a threat and it’s up to Dirk and the gang to stop them in their tracks. But first things first — they need to find each other… The season begins with Dirk trapped in the government organization of Blackwing for the last two months, unfortunately re-immersed in the nightmares of his childhood, and separated from Todd and Farah. Dirk seems to be utterly defeated in his current surroundings with no obvious way out. Meanwhile, Todd and Farah are free, but on the run from the authorities. They are desperately clinging to what remains of their resolve to be reunited with not only Dirk, but also Todd’s sister, Amanda. Like Dirk, with the exception of Vogel, the Rowdy 3 have been captured by Blackwing; Vogel escaped with Amanda and they are determined to help their friends escape from Blackwing, if only they can find its top-secret location. Mr. Priest, Blackwing’s enforcer, is in hot pursuit of them, and their time is quickly running out. Blackwing is back up and running, but under the confused direction of its new leader, Hugo Friedkin. He is unable to make heads or tails of the existing Blackwing subjects and their “gifts”, and finding that their vague powers offer him only frustration. Over time, he receives reassurance and guidance from his interactions with Ken, the newest addition to the Blackwing subjects. Meanwhile, Bart is traveling solo, looking for Ken every chance she gets. She is now in a self-imposed rehabilitation from her innate violent ways, but it’s not yet clear what impact her defiance will have on the universe. Elsewhere, a woman named Suzie Boreton has a very bad day. Everything and everyone continues to be connected… from the sterile chambers of Blackwing, to the sleepy town of Bergsberg and the magical land of Wendimoor. After a few misfires, Dirk Gently steadily finds his footing on the new case to “find The Boy,” and with the help of his friends, makes the necessary connections to solve the mystery before it’s too late.